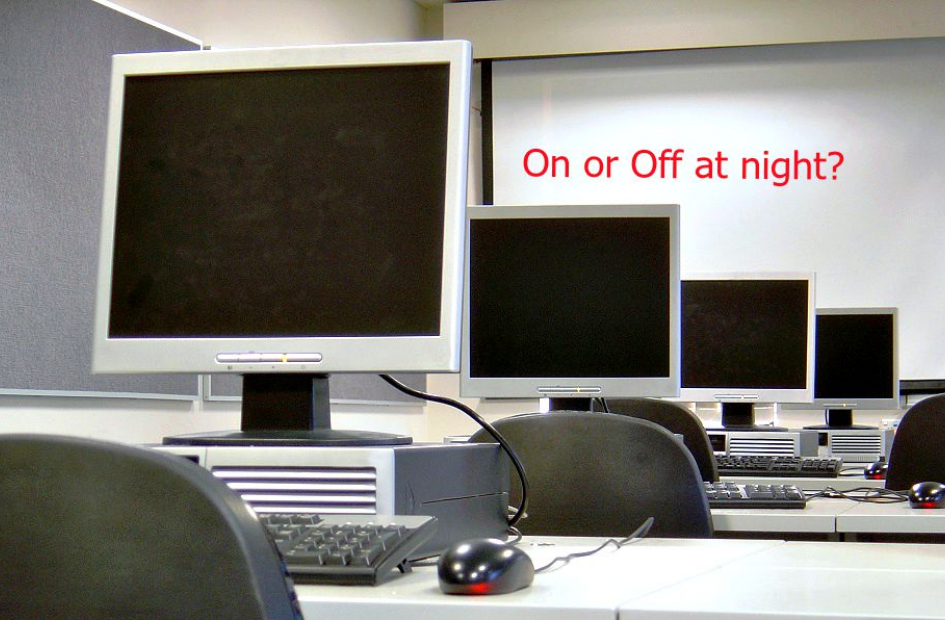 By Francis West on 1st September 2015

As an IT Support company based in London and looking after many small business owner’s businesses, we are often asked the question, whether to leave the PCs and laptops on or turn them off every night.

If we rewind about six or seven years ago an average PC would use roughly one hundred pounds worth of electricity per year if left on all the time. Today, with the smart power management on machines, the cost of running a PC 24/7, 365 days a year, will be about £50 per PC per year. For a laptop it will be even less.

An example - is this you?

Let’s use an example of a Recruitment company with 20 staff and the computers are not maintained well. In this case the average PC will take anything from 5 to 10 minutes to boot up.  Sometimes even longer because when computer logs on, it wants to complete all the Windows updates that should have been done during the night and then another reboot. Sigh! The staff member in these cases normally either goes for cup of coffee whilst waiting for the PC to boot up, or they would speak to their fellow colleagues about what they did last night. All costing the business money and lost productivity because the staff member can’t work.

How long should a PC last?

A typical PC hard disk in a PC is designed to run continuously for 50,000 hours MTBF. That stands for mean time between failures and sadly I worked out how long this is. It equates to 7.7 years. Most business owners I know will replace their PCs well before that time period has passed because they like their staff to work as fast a possible.

How much does it cost to run a PC?

How much will I save by leaving the computers on every night? Let’s do the numbers.

If you would like more tips and or advice on how to improve your IT systems to reduce productivity loss and frustration, please contact us on 0203 195 0555 or help@westtek.co.uk.

How much does IT interruptions cost my business?

It Support Companies Says "It's not our responsibility"